The number of Americans who oppose marriage equality is dwindling fast, but it appears many of those remaining homophobes are representing Montana in the legislature.  In spite of the 34 representatives who voted today to retain Montana’s antiquated law criminalizing homosexual sex.  The statute, which classifies homosexuality as sexual deviance, on par with bestiality has been declared unconstitutional in a 1997 decision by Montana’s Supreme Court, but that fact is apparently of no consequence to these representatives, including Rep. Champ Edmunds (R-Missoula)  who is currently running for the Republican candidate for US Senate.  Ten senators earlier voted against repealing this law.

The final House vote tally on SB 107 is as follows: 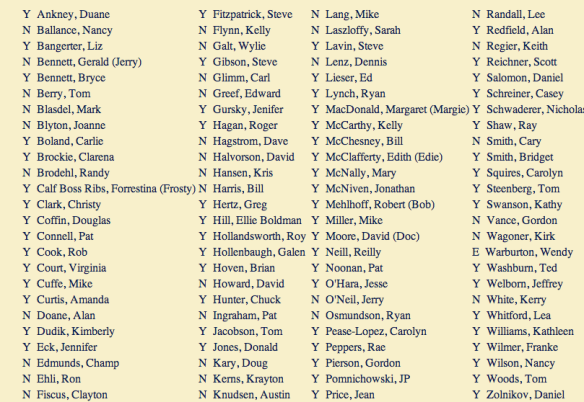 In case you missed it yesterday, Representative Duane Ankney (R-Colstrip) provided testimony in support of repealing Montana’s ugly and embarrassing law.  Watch his testimony here.  Another Republican supported repealing the law for very different reasons, from the Billings Gazette, (emphasis mine)

“I don’t support this type of lifestyle,” he said. “I think we need to keep our eye on the ball and start promoting marriage as a union between a man and a woman. …

Rep. Hagstrom (R-Billings) said he voted no on SB 107 because gay sex doesn’t reproduce people and therefore is a deviant act.  Rep Krayton Kerns (R-Laurel) naturally evoked religion as his justification for opposing the bill, claiming it was his moral obligation not to pass the legislation. “There is an enormous biblical principle here. There is a truth. I know public opinion may be swaying with the time but the truth does not sway and so it was default to scripture.”

Despite the hateful church crowd, the time has finally come to repeal Montana’s law criminalizing gay sex. After 20 years of failed attempts- who could forget last session’s “gay recruiting” testimony by Rep Ken Peterson (R-Billings)-  a repeal decidedly passed both houses and is headed to Governor Bullock’s desk, awaiting a certain signature.

Congratulations to sponsors Sen. Tom Facey ( D-Missoula), Nicholas Schwaderer (R-Superior), Rep. Ellie Hill (D-Missoula);  the other legislators who supported this bill as well as Montana’s LGBT community.  It is time that Montana puts this law in our past.

Take some time to thank the Republicans who did the right thing in voting for SB 107.    For those who didn’t, I guess we could pray for them?