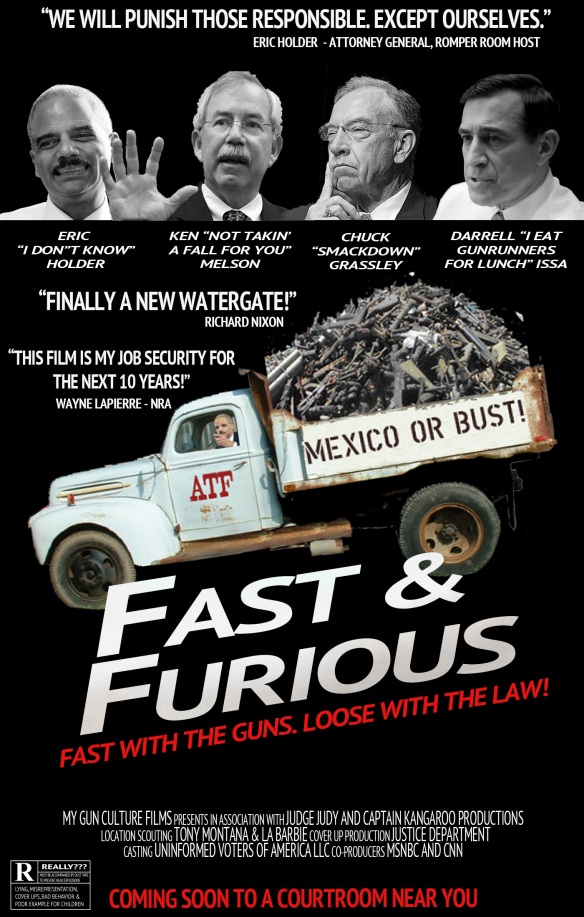 The ATF will do anything to catch criminals, even create them. For years the Obama administration, with the assistance of the media has carefully fed us the falsity that 90% of all firearms seized from violent Mexican drug cartels originated in the United States.  Never questioning our porous borders or lack of immigration enforcement, many simply accepted the claim.  Recent revelations have unfortunately indicated that this narrative is indeed partially true, although not for the reasons one would think. According to investigations, the Obama administration used federal agencies armed with stimulus cash, primarily the BATFE,  to supply weapons to our Mexican enemies in the “war on drugs”, also exchanging information with the Sinaloa Cartel allowing them access to sell cocaine in our country.  Using the “logic” that tracking these weapons would lead to arrests of higher ranking criminals, the agency curiously failed to initiate any recognizable plan to actually track them. So, ATF agents supplied violent drug cartels with thousands of guns, many of which were later involved in heinous crimes, some resulting in deaths of Americans.  Failing to acknowledge the inconsistencies within the bureau’s plan, Obama instead issued an executive order calling for more gun control.  With evidence mounting, ATF director Kenneth Melson was eventually fired…. I mean transferred.  Former Minnesota US Attorney, B. Todd Jones was hired to replace him.  After crafting the rhetoric to sell the crisis they created, Jones promised to get the agency back on track.

“There are going to be some changes that happen, and there’ll be a refocusing on our primary mission, which is violent crime.”

Only twelve days later, the embattled agency issued a letter reiterating and clarifying an unenforceable policy prohibiting state-licensed medical marijuana patients from possessing or buying firearms or ammunition.So much for refocusing the ATF’s mission on violent crime. The information in the letter, sent to firearms dealers; is nothing new, in fact; the Gun Control Act of 1968 specifically prohibits firearms ownership and use from the following:

Because the federal government doesn’t recognize lawful marijuana use by anyone (not even the four patients who are supplied with marijuana by the federal government) this is no surprise. While the content is not new, with the sweep of a pen, an estimated 500,000+ otherwise law-abiding citizens had their second amendment rights rescinded. No mention of alcoholics, oxycontin snorters or gas huffers, the dangers posed by medical marijuana patients owning firearms far outweigh any potential benefits, right?

Careful analysis of the ATF’s Project Gunrunner and Fast and Furious, including resulting Department of Justice actions, suggests that the scandals were not so much botched law enforcement surveillance but Cloward-Piven style strategy, demonizing firearms dealers and American gun owners in hopes of obtaining the necessary political capital to enact sweeping gun reforms, including the UN Small Arms Treaty, which places the responsibility of regulating American’s firearms in the hands of United Nations.  The BATFE letter is perhaps a distraction from the corrupt and paradoxical realities in the agency.  More likely, however; the ATF is simply following orders from the White House.

Obama as well as many in his administration have records of hostility to medical marijuana rights as well as firearms rights.  In fact, after campaigning with promises to stop raiding medical marijuana facilities, Obama’s DEA has managed to rack up more raids in three years than agencies under Bush accomplished in eight. Americans for Safe Access gave Obama a failing grade for his marijuana policies.  During his campaign for the Presidency, Obama said “I have no intention of taking away folks’ guns” yet he appointed two Supreme Court justices who will do it for him. His anti-gun rights record is hard to argue.

Over 200 people are dead as a result of the US government’s new role as an arms dealer to our southern neighbors while also providing millions in foreign aid to Mexico for the expressed purpose of combating the cartels that we are also funding. If nothing else, we are wasting massive amounts of money funding both sides of a conflict we never intend to win. This war has no defined goals or targets… it was obviously meant to never end.  If the US isn’t able to enforce its own drug laws without first breaking them, perhaps we should utilize a new strategy.