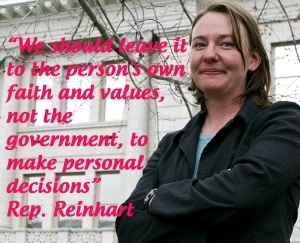 “We should leave it to the person’s own faith and values, not the government, to make personal decisions.  No one’s actions should be dictated by another person’s faith.”

Calling the Montana’s 2011 lawmakers (according to pro-choice leaders, all 96 Republicans in the legislature are pro-life) one of the most extreme anti-abortion legislatures in two decades, leaders of abortion rights groups urged their supporters to pack the Capitol to defend their right to exterminate the live repercussions of their sexually permissive lifestyle at their will.  Today’s rally attracted 150 abortion fans who waved signs with emblazoned with phrases like “Birth Control, Not Bans”, “Montana is PRO-CHOICE”, and “Pro-Choice, Pro-Family”.

“They are not close to being moderates at any level.  They have an extreme agenda, which aims to strip women of their ability to make private medical decisions.”

I find it ironic that the same people claiming that Republicans are stripping away rights and allowing the government to make private medical decisions are also the same people who advocated the federal government forcing millions of Americans to purchase undesirable and expensive health insurance via Obamacare.  The liberal mentality is such an enigma.  Let me get this right…putting criminal monsters (like Nathanial Bar-Jonah) to death is entirely too barbaric yet obliterating the most innocent lives is a RIGHT.  The federal government can apparently make all healthcare decisions for us except those involving our unwanted offspring.   If they’d truly like to see the government stay out of their decisions, Planned Parenthood should be defunded  (half billion+).  Maybe people would begin to take responsibility for their own actions if the government was no longer in the abortion business.