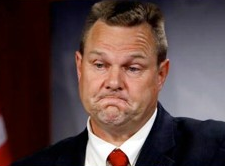 The paranoid Montana Democrats have filed a complaint against Steve Daines, who they claim is running an illegal shadow campaign for the US Senate seat currently held by Jon Tester.

At issue is a youtube ad posted by Common Sense Issues PAC attacking Tester and Baucus and appearing to endorse Steve Daines for their jobs- although the ad never mentions Daines, nor does the group’s website.

In a telephone interview with the Billings Gazette today, Daines maintained that he isn’t currently a candidate and expressed concern that the Democratic Party had consulted with the media before filing with the FEC.  The Gazette also mentions the “Draft Steve Daines for US Senate” Facebook group but fails to note that it was created by College Republicans- not by Daines, the Montana Republican Party, or the Common Sense Values PAC.

While it is widely believed that Daines will be filing soon (rumored to be November 13), there is also some speculation that current US House Representative Denny Rehberg is also interested in the position  which has led many to wonder if Daines will instead run for Rehberg’s House seat.

Personally, I just think Jon Tester is unhappy with the new website the PAC created which pokes fun at the senator’s inability and unwillingness to answer questions from his constituents.