While prohibitionists in Montana were celebrating the elimination of access for medical marijuana patients, Colorado and Washington were making history by voting to end prohibition in their states. Marijuana activists in Montana were unsuccessful in the 2012 election in an attempt to overturn SB-423, state Senator Jeff Essmann‘s draconian measure that essentially eliminates medical cannabis providers and thus access for most medical marijuana patients.  Although the results were not as we hoped, we actually did win on several levels.

First of all, marijuana patients, providers and activists were incredibly successful in making marijuana reform a mainstream issue that Montana’s politicians can no longer ignore.  Now that American support for ending prohibition is greater than support for either political party, we know that it is only a matter of time before Montana’s prohibitionist politicians realize that legalizing marijuana is a winning proposition.  Besides creating jobs and improving our economy, virtually all data indicates we can make our communities safer through thoughtful regulation than through prohibition.  Colorado and Washington’s absolutely historic decisions further weaken the already failed  war on drugs.  We are confident that science and compassion will eventually prevail in our state as well.

Republicans were largely unsuccessful in the 2012 general elections.  If the party cannot produce a candidate capable of beating the unpopular and polarizing Obama, Republicans need to conduct some serious self-examination.  Unless the party can somehow attract younger and independent voters the GOP will continue to lose national and statewide elections.  Independents and young voters are generally repelled by bigoted, prohibitionist platforms reminiscent of policies from a century ago.  Disturbing references like “legitimate rapes”  or calling babies conceived in the act of rape “gifts from God” serve to only to alienate women as well as compassionate and thinking human beings and this was confirmed by election results. 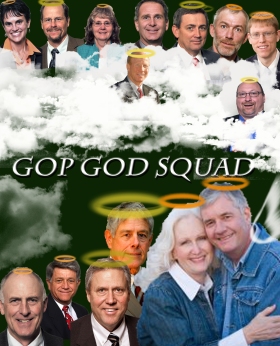 All is not lost for Montana Republicans though. The 2011 GOP God Squad lineup remains largely intact (with several additions and the removal of Knox)  as Montana’s prohibitionist legislators were rather successful in their bids for reelection. Some of Montana’s best and brightest Republicans will again be representing us in the state legislature.  John “I’ll only vote for marijuana if it is to put it on the noxious weeds list” Brenden won in SD 18 by a wide margin, as did Sarah Laszloffy, Bethel School of Supernatural Ministry alumnus and daughter of gay-hater Jeff Laszloffy of Montana Family Foundation infamy.  Park City Rep. David Howard, who we all remember from his Facebook post claiming that one could “catch AIDS from sharing used marijuana” won his race for HD 60 in a landslide.  We cannot forget to mention Rep. Cary Smith, husband of co-founded of Safe Communities, Safe Kids Susan Smith who easily beat Democrat and (also) prohibitionist Bob Winger easily.  Other notable prohibitionist winners were Krayton Kerns, Joanne Blyton, Bruce Tutvedt, Dennis Lenz, Doug Kary, Taylor Brown, Janna Taylor, Keith Regier, Scott Reichner, Wendy Warburton, Liz Bangerter, and Champ Edmunds.  Let’s not forget about Scott Sales, whose wife embezzled thousands of dollars from her own mother; dog murderer Roger Webb, and accused rapist Nicholas Schwaderer, who will also each be proudly representing their districts in Helena in January.

Although I generally think that the Republicans need to embrace the party’s fiscally conservative roots and to utilize their brains more effectively than their bibles in creating legislation, this advice obviously doesn’t apply to Montana, where the GOP’s new lineup promises more (humiliating) entertainment than the disastrous 2011 legislative session.