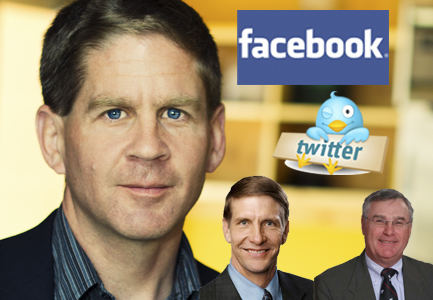 4&20 blackbirds  recently posted “Social Media and Montana’s Road to 2012…. or Your (sic) Doing it Wrong”. Although I disagreed with a few of the blogger’s liberal-leaning critiques, the bulk of the post was funny because it was so true.  The post suggests that successful use of social media includes the following:  engaging friends, eliminating staff posting (create your own posts), making posts personal yet using a filter(ask Weiner about this), utilizing creativity and wit (if available), and researching Montana’s candidates who have been successful in promoting themselves in today’s technological age (like Mike Miller and Ellie Hill) The blogger also discouraged candidates from following too many people and posting anything resembling something from the Facebook wall of James Knox.

Recent research has suggested that in predicting elections, social media presence is at least as important if not more than the amount of money raised by candidates. Now that the governor’s race in Montana has been elevated to Politico’s most competitive in the nation,  I decided to examine the use of social media by a few of the GOP’s Gubernatorial candidates. I’ve included promotional videos for each candidate, links to their social media accounts as well as an  unbiased assessment of overall performance.

Viral ads: Hill’s campaign has been fraught with controversy thanks to a scandalous past brought to light by a concerned conservative friend of Ken Miller, prompting Mermaid-gate and our third most-viewed post of all time.   Hill’s Mr Rogers-esque promotional video betrays no signs of his wild side, so thank you to whoever was responsible for compiling the sleaze (yes, Nancy Davis, I’m talking to you), effectively making Mr UN seem just a little more electable/desirable than he likely is in reality.  I will leave the family values comments to the Miller camp.   Twitter: Hill has yet to master the art of the tweet and tends to primarily post links to his own campaign’s promotional posts, which is not a recommended course of action, especially because his promotional material is so uninteresting.  Facebook: Hill is off to a slow start, although this is his…. third start? His former Facebook group “A Lot of Folks for Rick Hill” peaked at well under a hundred folks and his handlers changed course a couple of times as a result.  Long-time lobbyist Hill earns an easy grade of Fail for his inability or unwillingness to engage his followers.  His posts are boring and receive very few, if any comments.  I can’t determine whether his posts are his own or from his staff, but let’s just hope they were written by staffers.  There would then be room for improvement.  Overall: Hill’s filter, if applicable; is far too fine to allow any effective engagement let alone posts that demonstrate any level of creativity or wit.  This campaign- even with the added excitement of the mermaid- is utterly soul-less. Verdict: Over the Hill.

I perused Livingstone’s website and was only able to find a number of national news interviews about terrorism and a dreadfully boring interview by Montana Shrugged so I decided it was in Mr Livingstone’s best interest that I not post a video at this time.  Should his campaign provide us with a promotional video, we’d be happy to post and assess it however. Twitter:  Neil’s tweets comprise an interesting combination of terrorism discussion, cooking/recipes, and political commentary- some of which even is relevant to Montana.  His filter appears to be working properly and his tweets are somewhat frequent.  His recipes offer a glimpse into his personal non-national-terrorism-expert life although many Montanans still may be unable to relate- Morel popcorn, anyone?  Facebook:  This account could use some work.  Livingstone should probably link his Facebook to his Twitter and blog to streamline posts among the outlets-  otherwise it appears that his Facebook account is more of a recipe repository than a Gubernatorial campaign page. I’d also suggest posting more links and statuses that relate specifically to our state. Livingstone’s personal wealth alone makes him a contender but he faces many obstacles in gaining name recognition beyond political junkies and terrorism buffs- if terrorism buffs actually exist, that is.  Nearly a year remains before primary elections in Montana.

Viral Ads: The only shocking- or even remotely energizing- component of Miller’s video is found within the youtube view counter-  there have been 1,217 views of this gouge-your-eyes-out-boring piece.  Miller’s overall presentation is dull as is the content.   Twitter: If the Miller campaign has a Twitter account, I’m not aware of it.  This is probably for the best as successful tweets require a level of spontaneity and authenticity that would be difficult for a fledgling Tweeter like Miller to pull off. Facebook: Staff/TEA people regularly post as Miller on his campaign site, as evidenced here.  He engages followers minimally and generally refers those who have questions or comments to his cell phone.  He seems to be doing a good job at physically traveling around Montana as evidenced by the plethora of photos posted from each location on the campaign trail but to me he seems a bit reluctant.  Miller’s supporters compensate for his lack of energy, however.  In fact, one of them sent out this ambitious campaign donation solicitation, complete with a conspiracy theory theme.  Overall: Before utilizing the above-mentioned filter, his campaign should instead employ the use of spell-check.  Considering his lengthy political history, I’m rather surprised by his selection of a rabid tea person as a campaign site administrator.  Engagement with voters is important, even when the issue at hand isn’t one Governor Jan Brewer supports- Miller failed to effectively respond to medical cannabis patients’ questions at a recent event at a gun shooting facility- his wife Peggy instead forcibly interfered with the video recording of his responses.  Miller has much to learn in the world of social media, but with God on his side, he should have no problems.

Viral Ads: Stapleton’s piece is by far the best and I love that it isn’t bloated or ego-driven. This edgy promotional material is consistent with earlier photos released by his camp and it is apparent that he has employed a team of talented individuals to head up his marketing. This video was released last night, but already has over 100 views on youtube and more on Facebook. Twitter: Although Stapleton’s tweets are interesting-  like this one: “Gov Schweitzer wants to sell MT’s coal to China and solve their energy shortages. I want to sell MT’s coal to America, and solve our own.”, they are infrequent.  There is room for improvement here- more in numbers than content.  Facebook: Over 4000 people “like” his page compared to Hill’s paltry 345 and Miller’s 1017.  Little investigation is required to determine why he has 4 times the number of Facebook fans either-  his wall is a pleasant mix of thought-provoking questions and statements with a few personal touches here and there. Stapleton seems accessible and his friends appear engaged.  Stapleton isn’t afraid to make controversial statements and the ensuing debates with his friends are polite and rational.   Overall: Stapleton wins. He appears to handle his own social media (or he’d likely have far more tweets under his belt) and I thankfully wasn’t able to locate any post likely to be written by James Knox.  Friends are engaged, posts are witty, creative and a bit dangerous.