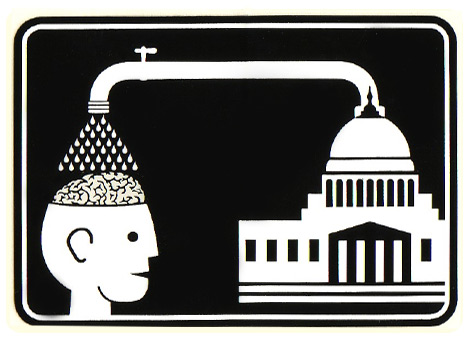 Whenever I think that America is by and large too intelligent to accept our federal government’s propaganda, another Facebook friend will remind me that I’m mistaken.  Last week, Ron Paul and Barney Frank introduced HR 2306, legislation to remove marijuana from federal regulation,  allowing individual states to create their own laws governing the plant’s use, cultivation, and sale.  The bill is obviously rather controversial and my Facebook news feed indicated that I had plenty of close-minded pals who were content to accept what ever current truth the government was peddling.

It’s illegal! It is a schedule I substance! It is a gateway drug! It is dangerous and addictive! It is immoral! I find it absolutely abhorrent that anyone places their trust in government.  Are you aware…..

Your government lies to you.  Period.  Regardless of political affiliation, our government serves to feed itself, certainly not to protect us.  We need to stop the partisan bickering and realize that our own government is the enemy.  We are overcriminalizing to justify expansion of law enforcement and tax increases while losing the fundamental liberties our nation was founded upon…. and yet Americans accept it.  Where is the public outcry?

Every 30 seconds another American is incarcerated for a cannabis “crime”.  Yet, in legislative hearings and court proceedings, so many of us blindly accept the words of narcotics officers as truthful.  Mark Long, for instance; is Montana’s Narcotics Bureau Chief.  Although that is his official fancy title, he often testifies on behalf of the Montana Narcotics Officers Association, a non-profit organization of law enforcement officers who aren’t even required to reside in Montana whose mission includes the statement “It is imperative that we, as law enforcement officers, have a better communication network than that of the people we deal with.” I suppose that is referring to criminals? Can we really trust that Mark Long would be honest? Especially considering the likelihood that a large portion of his friends, members of the association he represents would be unemployed as a result of rescheduling or decriminalizing cannabis?  If cannabis providers aren’t seen as credible witnesses because of their “profit-driven industry”, why are officers like Mark Long? Don’t we all protect our own interests?  Doing so, however; under the guise of public safety is inherently wrong and shouldn’t necessarily provide any appearance of truth in a courtroom- or anywhere for that matter.  Working for the government should not make anyone a more credible witness.

Mark Long recently spoke to the Gallatin County Republican Women about the rise in crime rates since Montanans approved the use of medical marijuana in the state in 2004.  A short time later, a preliminary injunction hearing was held on Montana’s new medical marijuana law, SB 423.  In testimony,Long clarified the statements he’d made to the Republican women, which were blatantly false.  He claimed that he was only referring to the increase in medical marijuana crimes in Montana since 2004.  Considering medical marijuana didn’t exist prior to that time in Montana….. hmm. OK.  Mark Long’s postition provides him immediate credibility with a bulk of Montana’s voters, but why is that?

Stockholm Syndrome. The abusive are masterful. They are doing this for our own good, who knows better than the almighty federal government?  The government is addicted to its own bloated budgets.  The self-righteous hypocrites trample the US Constitution while shouting that they are upholding it. In a world where alcoholics and pill addicts thrive, cannabis users are criminals.  The people least able to defend themselves, the ill; are forced to live in fear of their own protectors. The government propaganda machine is so refined that even highly intelligent individuals are lulled into surrendering their rights. Question authority.  It isn’t unpatriotic, it is American.  When we accept  what “authority” claims to be true without demanding proof, we betray not only ourselves, but all of mankind.